I found this photograph of John Martin while filing some old newspaper clippings. I made a valiant effort to locate him in my family tree files and could not. I contacted the archivist for the 4th Canadian Mounted Rifles and they were able to send me his complete service records but still I could not fit him into the families.

The photo was taken in 1915, 3 days before the 4th Regiment sailed for Europe. John Martin spent enough time at the front to be badly wounded by shrapnel (shoulder, knee and face). Surviving the war, he spent the rest of his life being treated for these wounds.

I found his next of kin in 1891 and 1911 census living in Hamilton. Was not able to make a connection to either the Williams or Appleton families. I contributed the photograph to the website of the 4th Regiment Canadian Mounted Rifles. This regiment appears completely unrelated to the 1st Hussars (Dad’s regiment).
I am sure the link is through the sister. His sisters were Emily, Louisa, Georgina, Maud. His mother may have been a Scott - Elizabeth (Scott) Martin. 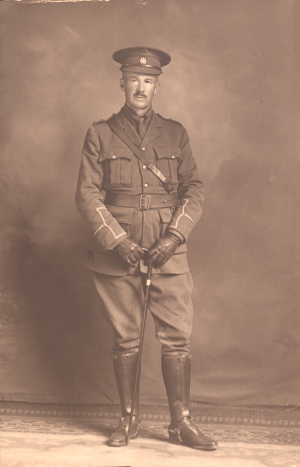 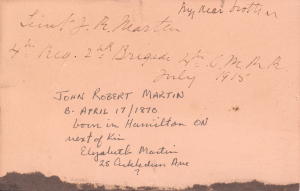