Tonight we will be hiding from the party hats and noise makers. New Years Eve will probably be celebrated by watching the goings-on in Times Square. The good news is that midnight there is 9PM here. We will still be awake.

We are still in construction hell and it is starting to be a bit tedious. A week ago some of the bricks for the courtyard arrived and they were laid. It took just a few minutes to determine that they were not the right brick. We have been waiting patiently tracking sand back and forth while the manufacturer pours new bricks and gets the finish right. We have now been promised January 2 for arrival but I will bet that it will not happen. I think it is more likely that we will see them early next week.

Carol and I had an invite out for dinner during the past week. The chairlady of the Tennis Committee is a very nice person and it was wonderful of her to include us in her gathering. One of the gentlemen (we will call him Peter, oh - that is his real name) turned out to be the first Republican wing-nut that I have had a chance to meet. Part way through a forkful of salmon he requested assurance from the other guests that we believed that Obama was a muslim. The responses varied from "No" to "Excuse me". Then he started in on Michelle Obama, but was cut short by his wife before the dunk was completed. One by one the Canadians at the table challenged the wing-nut. He finished chewing his mouthful of food, pushed his chair back, stood up, and went home (leaving his wife sitting there.) I think he was meeting Donald Trump for a beer.

Gasoline is $.64US per litre. It makes me want to go for a drive. There is lots of snow in the mountains today.

Here is the firework display from Sydney today:

Clocks From Irene and George 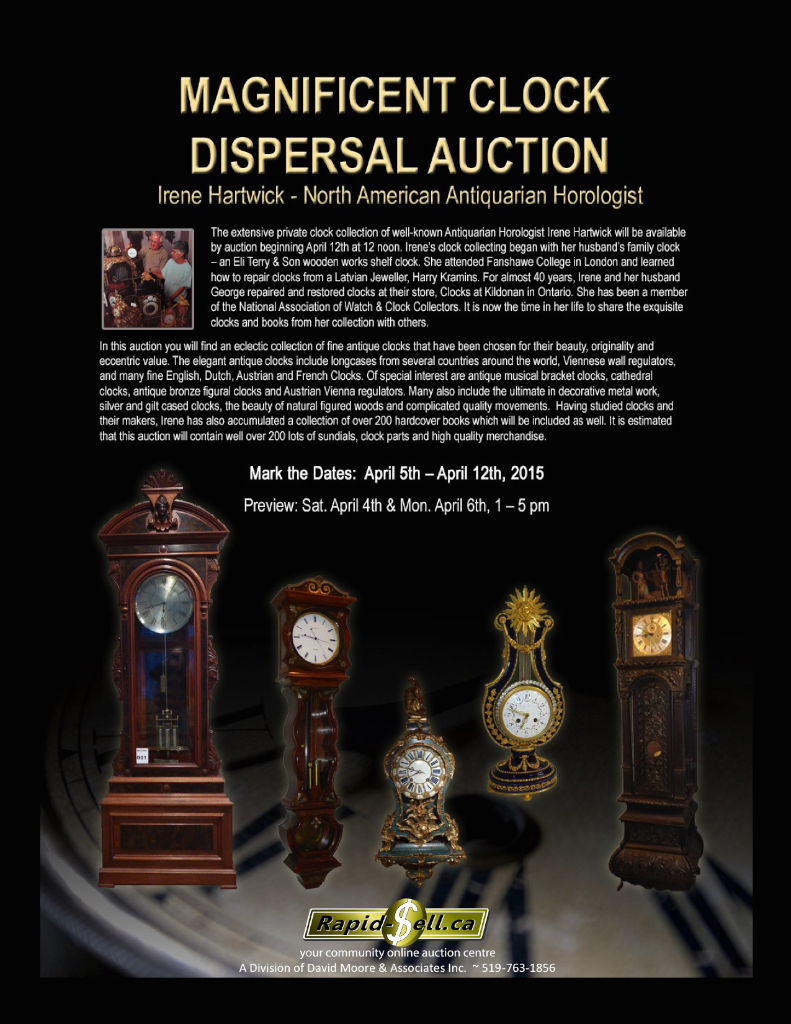 Carol and I received a wonderful Christmas card from our family. It shows all of the most important aspects of the Christmas seasons - children, couples, and couples having children. It made the old couple in California a little homesick. We sure do miss them. Then we think of the snow - Santa rides a surf board here. We are not going to have a traditional family Christmas. We will play some tennis at 9:00AM, and then go to the movies. There was talk of seeing the movie that has caused all of the trouble between North Korea and Sony. Who knows.

So far as Christmas presents are concerned I will place money that my gift to Carol weighs more than anything you give or receive - 1100 square feet of inter-locking brick. Carol gave me a dump truck load of sand. We are so good to each other. The bricks started to arrive yesterday but they were not the right ones and I had to return them. We are eager to get them installed as we have some friends visiting in January (although if they are not installed when Billie visits in February, we will just get her a pail and shovel and let her go to it. That should work too.

We have heard that Bronwen is expecting a girl. It is wonderful news. We are as pleased as punch. Well done Bronwen and Glenn.

Hint: Keep reading and you will find the origins of "pleased as punch".

It is Raining Again in SoCal

What the heck is this all about? I sign a contract for the courtyard renovation on December 11 and all of the workers go home on December 12 because it is raining. I am writing a letter to the home owners association suggesting that Canadians should get a reduction in Condo fees for every day it rains here. We have had 2 days of rain this year. Nuts (just kidding.)

We are having the courtyard demolished and rebuilt. Yesterday an army of labourers descended on the courtyard at about 8:00 AM. They started by digging out all of the shrubs, vines and other plants. Then they started with sledgehammers - thump, thump, thump. Finally the bobcat was brought in to lift chunks of cement out into the driveway where they continued to whale at them with sledgehammers until they were small enough to pitch into a trailer and cart off. I wonder if these cement chunks are recycled or if they go to the dump. Come to think of it the plants were treated pretty well too - I wonder if they are being taken to a plant emergency ward. We had not watered or taken care of the vegetation over the summer so it needed some help. Maybe after being nursed back to health they will find their way back into a garden (not here). 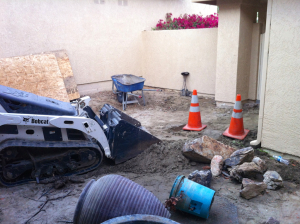 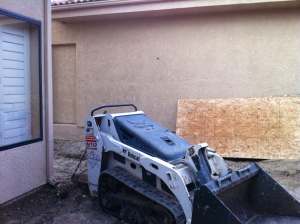 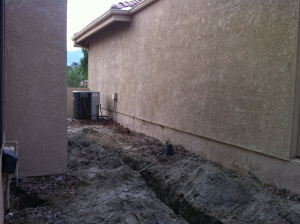 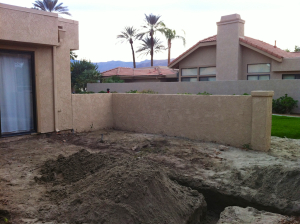 Today they finished up the demolition and started digging trenches for gas lines (gotta have a fire pit and BBQ you know).

The plan is to use "pavers" in the courtyard. Carol and I call them inter-locking brick, but here they are called pavers. They have been chosen and they will be laid after the gas lines and irrigation system is installed.