Finally some words to match the photos.

These photos were taken at East Beach on St Simons. It is one of the best beaches that I have ever seen - kilometers long, a couple of hundred meters wide, clean sand and people really enjoying walking, digging and exercising their pets. I really dislike walking on most beachs but this one was a great walk. The sand was firm under foot, it had a very gradual descent to the water.

I stopped to help some old folk with their group photos. They were happy to oblige and share their pleasure. 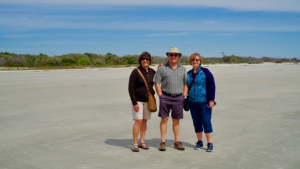 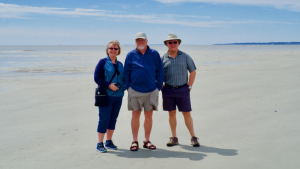 We have moved on from Nettles Island to Titusville for the planned launch of a communications satellite at 6:58PM this evening. While at dinner we had a quick look at the NASA website to ensure that we had the time right. Oops, it has been delayed until March 15th. We will be gone - nuts.

We are installed in a unit on Nettles Island. It is old and tired, unclean, and inhospitable. But for now it is home. We rented it based on photos on the internet and we will be a lot less likely to do that in the future. I have decided that we will not do any cooking in the place - I would not know where to begin. Joan saw the place before we arrived and warned us but it was all too late, we had made the booking and now we are living with it.

We are changing our plans though: there is a launch from Canaveral on the 13th and we will stay in Titusville for a couple of days to see the launch and visit the space centre and then we will head to The Villages to stay with some friends from Collingwood/Palm Desert who now own a home In The Villages. Our final stop will be with Marsha and Jamie on St Simon Island in Georgia - then we will head home.

Carol and I are Panama Canal veterans. We have now travelled from the Atlantic through all of the locks to the Pacific. The 1st three locks were aboard the cruise ship and they took 90 minutes. The last 2 sets of locks into the Pacific took 10 hours (6 hours by bus, 4 hours by boat). Just saying.

Here is a picture of Carol and I studying the lock from insire our cabin. It is funny that the camera perferred to record Carol and I looking at the lock rather than the lock itself. It is an overlaid selfie I guess.

We decided to take the Hop On/Hop Off bus through Cartagena. Although it is a beautiful city with a terrific old walled portion of the city, it was overrun with stret vendors trying to sell sunglasses, tablecloths and bottled water amongst the usually locals crafts. I swear it was the same tablecloth vendor in each square and side street.

There were not many opportunities for photographs but here are a few.

The 1st sign that things were not going as planned was when all of the luggage without contraband showed up but none of the luggage mules. Hours passed. Then the remaining bags showed up without the Scotch and without the Gin. Each bottle had been replaced with a really well written card explaining that the laws of the sea left the cruise line no choice but to claim the bounty and destroy it.

This morning I check the onboard Duty Free to see if they had been out on the shelf for sail.

Tomorrow we are in Grand Cayman. If I see a liquor store I am going to try again. I will beat these guys yet. Interesting that I no longer drink.

We are on the boat and heading to Panama. A couple of days ago we had a decent scare when an email arrived saying that they had a few cases of Norwalk in the previous cruise that they were taking a couple of extra hours to sanitize the boat. We were asked to show up two hours past our scheduled arrival so that they could dedicate their time to getting the boat ready. We did.

First thing that I did was to weight myself in the gym to create a record of my weight. I hope to get off the boat in 10 days weighing at least that much.